By Emily Kay 3 years ago

The third edition of the European Tour Destinations Senior Classic will take place from July 12-14 at the home of Spain’s number one course, PGA Catalunya Resort, in recognition of the venue’s Stadium Course celebrating its 20th anniversary.

The resort, situated in Girona, Spain, has hosted three editions of the Open de España and was the setting for European Tour Qualifying School Final Stage for nine consecutive years until 2016, showcasing its quality at the highest level.

The European Tour Destinations Senior Classic has been on the Staysure Tour International Schedule since 2017, with past winners including Santiago Luna, who won at Finland’s Linna Golf Club in 2017, and Sweden’s Magnus P Atlevi, who triumphed at Lighthouse Golf and Spa Resort, Bulgaria, the following year.

Iain McInally, Head of European Tour Destinations, said: “This tournament has gone from strength-to-strength in the two years since its launch.

“I must thank the Staysure Tour for making it possible to hold this tournament and showcase some of our outstanding venues. Linna Golf Club and Lighthouse Golf & Spa Resort were both wonderful hosts, and we are excited to make use of the incredible facilities at PGA Catalunya Resort this year.”

David Plana, CEO of PGA Catalunya Resort, added: “We look forward to hosting the third edition of the European Tour Destinations Senior Classic and welcoming so many legends of the game for a wonderful festival of golf.

“The tournament will be part of a series of special events planned in 2019 to celebrate PGA Catalunya Resort’s 20th anniversary and the exciting journey we are embarking on for the future.”

Head of the Staysure Tour David MacLaren is pleased to recognise one of the finest venues in continental Europe: “After two wonderful editions of the European Tour Destinations Senior Classic, we are delighted to be visiting PGA Catalunya Resort in 2019.

“The Stadium Course is one of the best courses in the world, in my opinion and that of many others. It is a real test of golf, but also one to be enjoyed. To be holding a Staysure Tour event there is fantastic for all involved.

“The tournament is sandwiched between the Swiss Seniors Open and the WINSTONgolf Senior Open, making it a busy period for our players but one they will relish in the fight for Order of Merit points.”

The unique Alliance format of the European Tour Destinations Senior Classic means that amateurs are able to take part in both the Pro-Am event leading up to the weekend, as well as in the first two rounds of the tournament itself.

Opportunities to play in the Pro-Am and Alliance rounds are available, with packages starting from 520€.  (Full details listed below.) 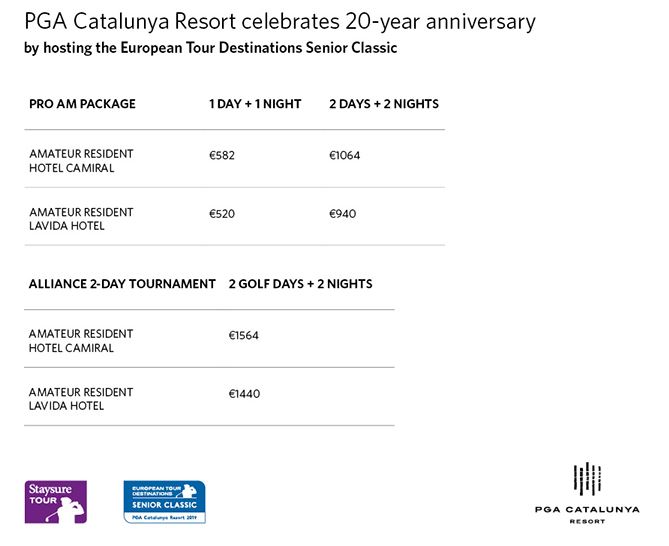